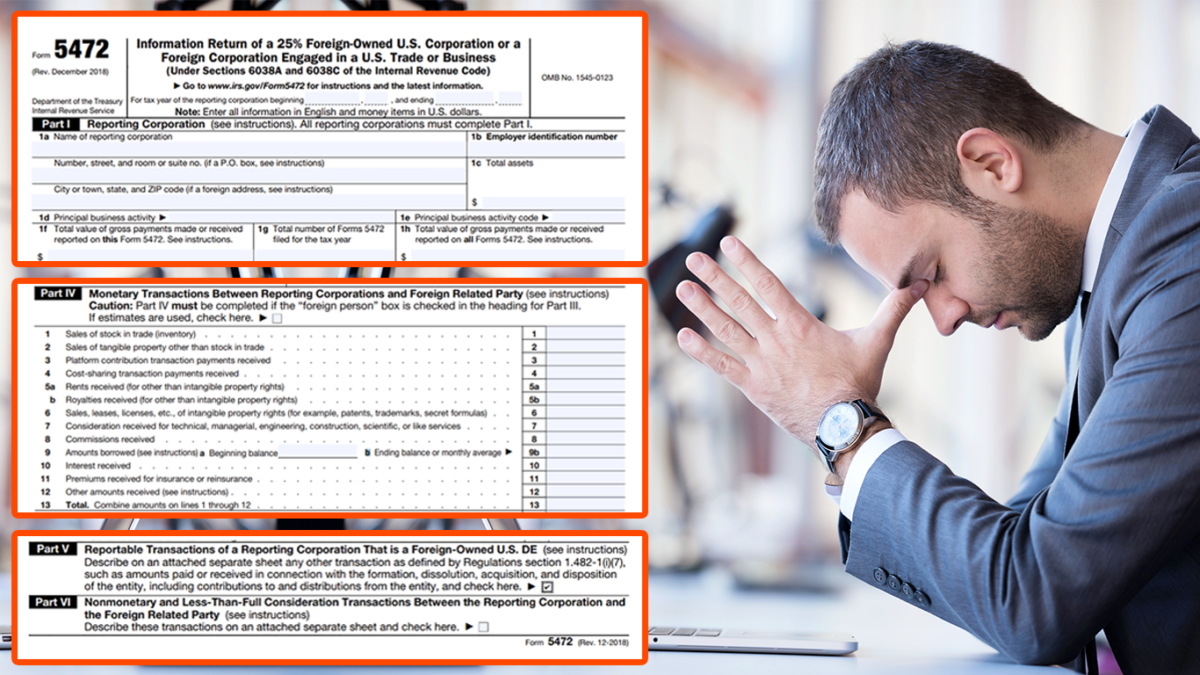 When Are Foreign-Owned Single-Member LLCs Exempt From Filing Form 5472?

When Are Foreign-Owned Single-Member LLCs Exempt From Filing Form 5472?

In one of my previous articles, What Forms Do Foreign-Owned Single Member LLCs Have to File?, I stated that:

Recently, I received an email from a reader who thought that this section might be misleading. They pointed out that according to the IRS document” Instructions for Form 5472 (Rev. December 2019)…

A reporting corporation is not required to file Form 5472 if any of the following apply. It had no reportable transactions of the types listed in Parts IV and VI of the form…

So, was my previous article incorrect? No. The exemption listed above (in my opinion) is not applicable to foreign-owned single-member LLCs.

Let me explain why that is…

First off, IRS instructions or publications like the one cited above are extremely useful resources for illustrating certain complex tax issues and procedures. They’re usually great for breaking the tax code down into layman’s terms and clearing things up for confused taxpayers. (And you should certainly follow those instructions, but with great caution and scrutiny).

However, these IRS instructions and publications are generally not authoritative sources of federal tax law and not binding on the IRS itself or the U.S. Tax Court. “Taxpayers who rely on them exclusively do so at their own peril”– see Caterpillar Tractor Co. v. United States, 589 F.2d 1040 (1978).

A number of court cases involving taxpayers and the Commissioner of Internal Revenue (C.I.R.) have consistently emphasized this fact. For example:

From the various judicial decisions referenced above, we know with certainty that the following types of guidance are binding with regard tofederal tax law:

The list above is not all inclusive, this article from The Tax Adviser provides a much comprehensive review of binding and non-binding documents or guidance available.

So in order to understand what’s truly required for foreign-owned single-member LLCs, we have to take a look at the actual statutes and regulations in question.In this case, that would be Code of Federal Regulations (CFR) Title 26, Section 1.6038A-2.

Section 1.6038A-2 provides both the requirement and the exception to filing Form 5472. It states that:

“A reportable transaction is any transaction of the types listed in paragraphs (b)(3) and (4) of this section.”

“If the related party is a foreign person, the reporting corporation must set forth on Form 5472 the dollar amounts of all reportable transactions for which monetary consideration (including U.S. and foreign currency) was the sole consideration paid or received during the taxable year of the reporting corporation. The total amount of such transactions, as well as the separate amounts for each type of transaction described below, and, to the extent the form may prescribe, any further description, categorization, or listing of transactions within these types, must be reported on Form 5472, in the manner the form or its instructions may prescribe.”

It then goes on to list the types of transactions this applies to, which includes the following:

“(xi) With respect to an entity that is a reporting corporation as a result of being treated as a corporation under § 301.7701-2(c)(2)(vi) of this chapter, any other transaction as defined by § 1.482-1(i)(7), such as amounts paid or received in connection with the formation, dissolution, acquisition and disposition of the entity, including contributions to and distributions from the entity.”

According to Form 5472 instructions, these transactions should be entered on Part V of Form 5472. Part V is for foreign-owned disregarded entities that had any other transaction as defined by Section 1.482-1(i)(7) not already entered in Part IV.

“A reporting corporation is not required to file Form 5472 if it has no transactions of the types listed in paragraphs (b) (3) and (4) of this section during the taxable year with any related party.”

But since formation and dissolution filings are listed as reportable transactions in 1.6038A-2(b)(3)(xi) (cited above), foreign-owned single-member LLCs are not fully exempted from filing Form 5472. They are required to report them in Part V of Form 5472.

Failure to do so may result in a penalty. The preamble to the Final Regulation contains the following introductory information to Foreign Owners:

“First, it was and remains the intent of the Treasury Department and the IRS that the generally applicable exceptions to the requirements of section 6038A should not apply to a domestic disregarded entity that is wholly owned by a foreign person.”

It is also important to note that Treas. Regs. Section 1.6038A-2(b)(3)(xi) adds to the list of additional reporting requirements treasury intended to capture, and to ensure that Foreign-Owned Single Member LLC’s report all transactions with foreign related parties.

I understand this all may seem a bit confusing, tax is LAW and interpretations may vary, but I maintain what I said in my previous article:

For example, let’s say you form a foreign-owned single-member LLC in Tax Year 2020, and you personally pay for LLC formation or organization costs. That money you paid on behalf of the LLC is considered a reportable transaction, you must report it on Form 5472, Part V.

It may sound harsh or funny, but it is worth mentioning that the LLC did not form itself, there is always a sponsor (whether individual or an entity) behind the formation of this entity, and such sponsor will always have to pay something to form the LLC.

For a deeper understanding of how these regulations work, be sure to check out the examples in the Final Regulation T.D. 9796 yourself.

Of course, these laws are very complex. If you’d like some professional help from a qualified CPA, I’d be happy to lend a hand.

Just contact me, and I’ll see to it that you’re abiding by the U.S. tax code, reporting what you need to report, and saving every dollar you can within the limits of the law.

2 thoughts on “When Are Foreign-Owned Single-Member LLCs Exempt From Filing Form 5472?”